Who let the Cougars out? 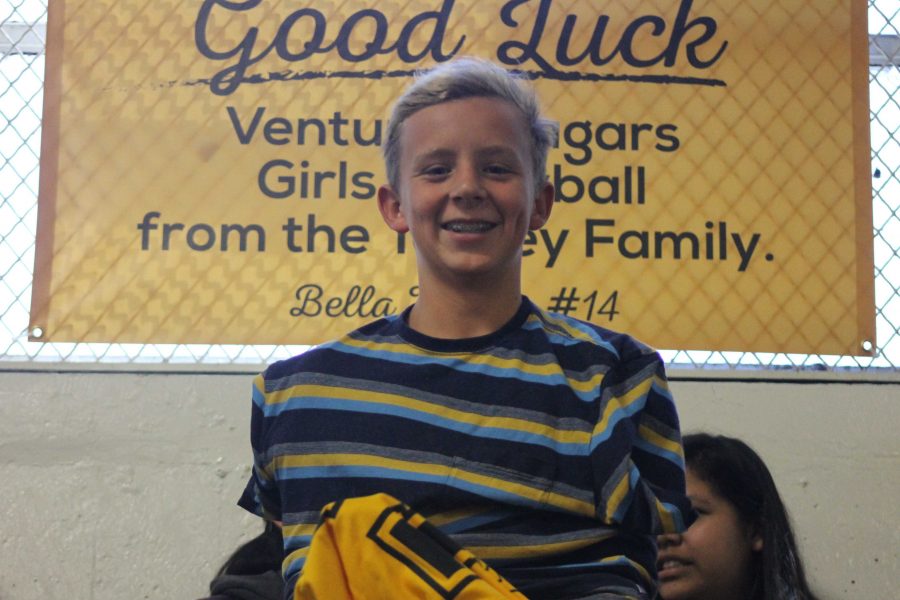 Freshman Rory Bruton says the highlight of his year so far has been, "the football games for sure." Photo by: Lola Bobrow

Ventura High School held its first pep rally in the Tuttle gym on Friday, October 6 to show its Cougar pride and welcome this year’s freshmen to the new school year. Bass-boosted music could be heard throughout the gym, with the new Cougars calling out to their friends in the bleachers.

The rally, held during fifth period, started with a speech given to the den mentors by principal Carlos Cohen. The rally continued with the handing out of free “V House” shirts to all attendees, and ended with an informational speech on upcoming events by Cohen.

Den mentors are juniors or seniors who have showed “outstanding citizenship or excellence in some area.” They are meant to guide new students into their first few months at VHS and familiarize them with campus life. Den leaders are teachers who agree to host den meetings in their classrooms.

Senior and den mentor Caroline Newell describes the den program as “a good way for [freshmen] to have an older connection [in high school]”.

Newell said of the den program, “It’s pretty exciting. I really like helping out the new freshmen especially because when I was a freshman I kind of wish I had some help around the school.”

The freshman den program is in its second year of existence.“It’s definitely a lot more organized [this year],” Cohen said when he was asked what he thought some of the changes were between this year and last.  “We’re more focused on getting the kids more connected [and] scheduling more activities for the rest of the year,” he elaborated.

Freshman Rory Bruton said, “I really like the school spirit… and the football games,” when asked about his favorite part of VHS. Bruton also said, “I think now with the den program, [orientation] will be more affecting the kids… I’ve met a lot of people through my den.”