It all starts with The Circuit of Life 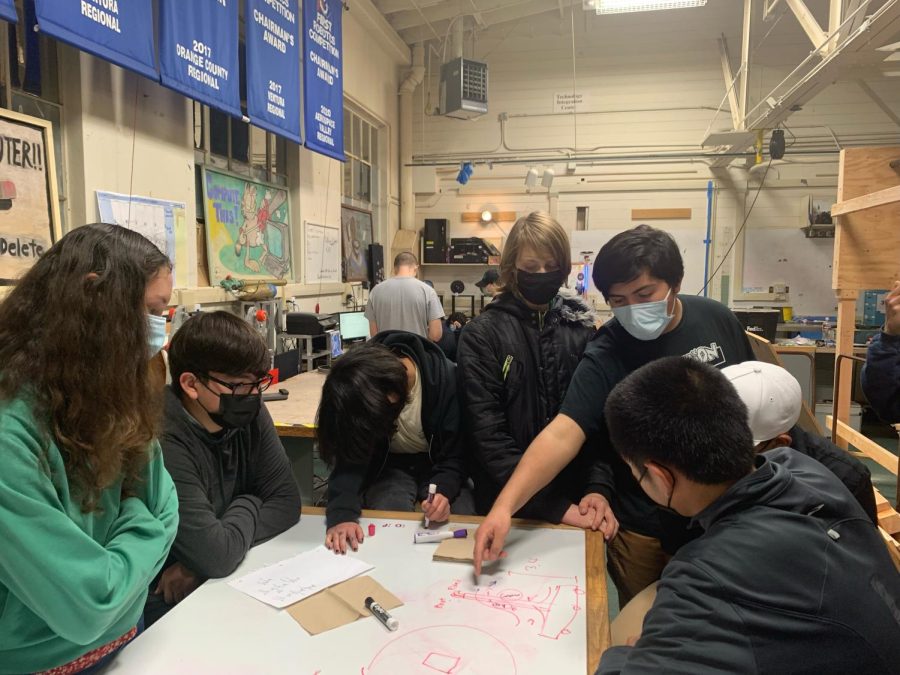 Team 3925 meets frequently, especially during build season. A week in build season can look like Tuesday-Sunday for roughly two to four hours. Photo by: Greta Pankratz

The VHS robotics team is in the midst of preparation for upcoming competitions
Ventura High School Robotics, better known to the robotics community as Team 3925, The Circuit of Life, was founded in 2011. It began with ten members and now is home to roughly 50 students with numerous mentors/adult volunteers. Normally, students meet twice a week on Tuesdays and Thursdays from 5 p.m. to 9 p.m. But according to senior Isaak Rivera, the hours of labor varies based on the season; “On a normal week, eight hours. Now in build season, I would maybe double that, 12? 16? The build season is big time.”

The class was originally started by Velma Lomax, and now has been taken over by Glenn Murphy. Murphy said, “I’m the teacher. It [robotics] was something fun and challenging and different. It’s one of those classes that I wish I had when I was growing up, so that’s what drew me in.” The team follows an advisor system, meaning all executive leaders are students. The adults in class are called advisors.

Sara Milesi, a junior from Saint Bonaventure said, “There’s mechanical, electrical, programming; there’s CAD and CAM which is technically in our mechanical department, as well. Then, there’s business, which in it has awards, media – all of that stuff – so there’s about five departments.” Unlike what the majority of the public may think, the class is not only engineers slaving over metal bots. According to Milesi, “The mechanical department builds the robot, and they’re more hands on with it…But in order to have mechanical working and all of the engineering department be able to do what they do, we need the business team and we need the operations side of the whole project to be able to happen. So, [business includes] any money, purchasing– anything like that. Whether it be social media when we’re at events, in the classroom, trying to get the word out there [or] scheduling; things like that.”

Milesi is at the top of the student leadership chain. Milesi explained her role in the class: “I’m the operations director… The student leadership starts with directors, leads and then any managers in departments. So in leadership, I’m the head student…what I do now is business, media, marketing, awards, all of that, so I’m more behind the scenes.” Milesi has been in robotics for three years officially. She said, “Unofficially, my brother joined the team, so I have been doing it for about seven years.”

Fourth year robotics member, Rivera participates in leadership also. “I am a CAD lead, I oversee the design of the whole robot,” Rivera said.

VHS senior, Sierra Myers, is the programming lead. Myers said, “I have to plan lessons or activities for us to do in a day and manage the group that is programming and coordinate with other leads as well.” Myers has been a part of the program for three years.

Robotics attracts students for all different reasons. Milesi joined due to inspiration from her brother and allure of the program’s unique offerings; “I watched my older brother Stefano go through this for four years and I was really interested in the whole program. The students were so interesting and really looking forward to coming into the class everyday, so for me it was like having a team that isn’t a sports team, but academic and geared towards a better goal in my opinion. And the class is also really community based, so trying to help out in Ventura and neighboring counties and stuff like that was a really great idea.”

Myers was also given encouragement from a sibling. “I joined robotics my sophomore year. My sister was on the team and she seemed to enjoy it, so I was curious about it and I wanted to try it out,” said Myers.

Rivera had a cut and dry explanation as to why he joined. Rivera said, “I saw [robotics] and I thought it was interesting.”

VHS Sophomore Ryan Gushwa, a second year member in mechanical had similar reasoning as Rivera to join the class, “I thought it seemed pretty cool and I needed something to do after school. It was on the email list of classes that needed more people. I was like ‘Oh I’ll take that one.’”

All the departments work together during a build season that culminates in completing the class robot. The robot is put up against other robots to complete tasks. Whichever robot completes the task in the best way, wins. “It’s not like battle bots; we compete. Some years they pick up balls, like skill competitions essentially,” explained Rivera, regarding the makeup of a competition. The team usually competes twice a year at competitions in the area. “We definitely make it to one regional, all the time, every single year without fail in the Ventura County region. Right now, this year, it’s not being held at the college the way it used to. It’s being held at Port Hueneme, so we’re really excited for a new venue. Other than that, we’ll try to get one regional in that’s super close to us, volunteer at it, do our best and then travel and do a second regional,” said Milesi. The team has won numerous awards like 2020 Chairman’s Award at the Aerospace Valley Regional, 2017 Chairman’s Award at the Ventura Regional and 2012 Rookie of the Year at the Los Angeles Regional just to name a few.

It is not just the accolades of the class that students remember most though – favorite memory of the program ranges from member to member. Participants cited moments with other robotics members, annual events or event community outreach. For Milesi its, “Probably teaching the class, because this is my first time having such authority and being a big part of something, so I am really excited to see where our class goes with everything and see how my teaching style and implications in the classroom have helped the students and in what ways I can get better to help them. So, for me it would probably be like stepping into such a big leadership role.” She said, “My first year when it was a bunch of seniors and then me as the only freshman – pretty much, maybe two others – we went to one competition that I went to before COVID. I just remember getting to hang out with everyone, seeing all these students who were going to college and were gonna be engineers. They were gonna be marketing majors, things like that. The other [favorite memory] would probably be maybe last year. I ran my first big event for the team. It was a Robo-Prom, so we had a dance here in the classroom and there’s just something about nerds dancing that I love, so it was great!”

Rivera recalled a competition from a few years back. “One time, we were at a competition and we did pretty damn good. It was the 2019-2020 season. Our robot was Kawalski; it’s like an arm that comes down. We were in a match. ‘Cus we’re in team’s of three, the two other robots were pretty much decommissioned and we won the match essentially by ourselves,” said Rivera.

Myers also had positive competition memories; “We did an off-season competition which was fun, so I’d say Title Tumble. That was my first experience in a robotics competition. I got to experience the atmosphere and actually compete with the robot that we were working on and see other team’s and interact with them and deal with more of the challenges that occurred. In the moment,it was just a nice, fun challenge,” she said, “when we were able to finally meet after last year and get in person. That was exciting.”

Gushwa reflected on an entire era of positive robotics memories. Gushwa said, “In the summers… It’s really laid back. We go to Santa Cruz a bunch and get snacks. We take a lot of breaks but we still get work done, obviously. And then also Wings Over Camarillo – that was  really cool. Wings Over Camarillo – the airshow.” Gushwa enjoyed the STEM demonstration by FIRST robotics and described it as, “pretty awesome.” Gushwa said, “It’s like Little League, or NFL or whatever but like FIRST Robotics.”

Murphy shared a positive comment from his experience as advisor: “A couple years ago we built this laser pointer for a student with developmental disabilities, like they could only point with their eyes and so they were having a hard time working with the student in classes. We designed a laser pointer that would only turn on when their head was tilted a certain way so they could point and turn it on by moving their head. That was really cool and awesome.” He continued, “Driving down to Battle at the Border to compete in San Diego – we took 20 students down there and we competed with 40 other team’s from all over the world and we had a great time.”

Build season is the time when students work on creating the robot that will be taken to competitions later in the school year. Gushwa gave insight on the process itself; “Each year a game is created, like an original game, and according to those rules, we design a fully functioning robot in like five weeks.” Build season is currently in full swing. However, when asked about the details of what happens in the shop and the robot that is being created to compete this year, robotics members are sworn to secrecy due to the competitive nature of robotics. When asked about what is being worked on during the 2021-22 build season, all members interviewed gave minimal clues on what the robot may entail. “Right now, we’re working on build season so I can’t disclose too much of what’s going on,” said Milesi. “There is like a little bit of secrecy just because we are competing against other team’s… But we are building a great robot this year. Right now we’re prototyping. We just went over strategies, so we decided what we’re gonna build for the 2022 game which is called Rapid React. Then we will start cadding all that, putting it together, building it, manufacturing everything in our shop, moving into competition season. So right now we’re in that middle stage of getting ready for comp season.”

Myers said, “Right now, we are working on a robot for the 2022 season for the robotics competition. We are coming in most days after school.” Rivera kept the details of build season utterly confidential. When asked about the robot for this year, he simply said, “It’s a robot and it does things.”

Once their final robotics season with Team 3925 comes to a close for seniors Rivera and Myers, the skills they gained in robotics class will continue to be carried with them into their planned career goals. Rivera wants to “get into a mechanical engineering degree.”

Myers would also like to pursue a STEM career. She said, “I do plan on going into computer science as my major in college. I’d want to work more with robotics in the future. In college, I’d like to go join some of the robotics centers or research centers they have if I’m able to because they are very hard to get in, but if I can, that’d be cool.”