Editorial: How cool would it be if colleges told you why they rejected your application? 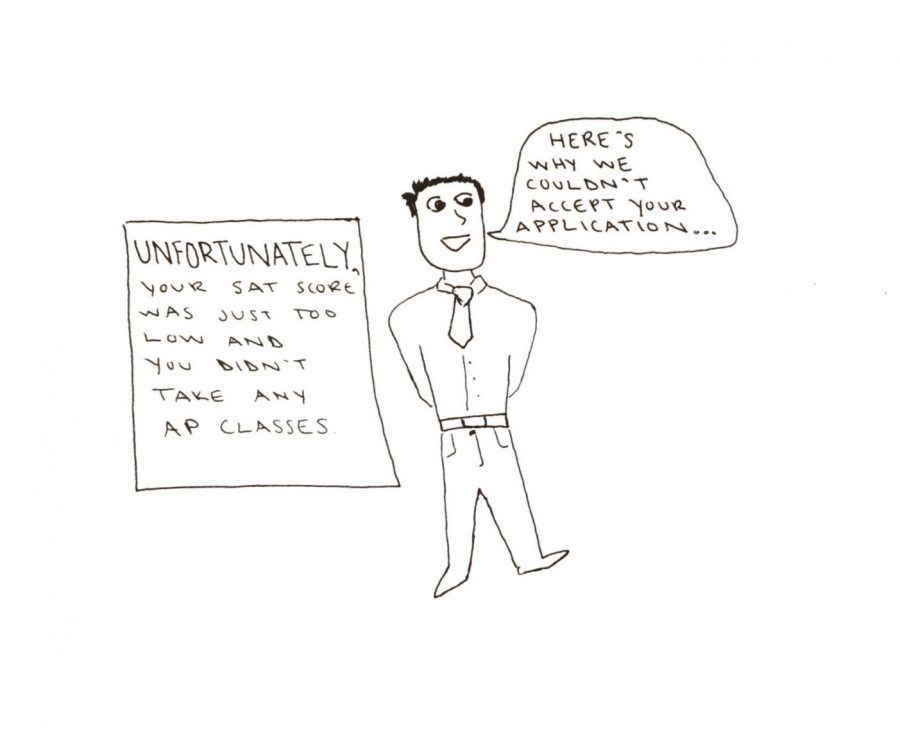 This isn’t sarcastic— it would actually be cool.

It is the month where the majority of seniors have received official notices from the colleges they applied to in the fall and winter on whether they got accepted or rejected. And this month is likely filled with a variety of combinations of ups and downs — except for the lucky individuals who only get accepted or the not so lucky who only get rejected, of course.

No matter, I can say with confidence that a large portion of seniors have received at least one rejection notice from a college, but it’s okay — we were just being ambitious, right?!

I recently received my a rejection notice from a college, and I was totally content with the fact that I did; however, reading the notice sparked an interesting thought.

What if the college told me why they rejected me?

So if I was actually devastated from being rejected of the school of my dreams, I could at least figure out a way to come to terms with why they felt that I couldn’t attend their university. Additionally, if I was so set on going to that college, I could attend a community college, in hopes of transferring to that college after two years — but I would have a bit of an understanding as to what I need to improve in order to be more successful in my second attempt.

And I’m not alone in believing this knowledge would be beneficial. According to a Twitter poll by The Cougar Press, 95 percent of 61 votes said that they would want to know why a college rejected their application.

You may be wondering how colleges, especially those that get tens of thousands of applications every year, could include a section explaining why you were rejected without taking up too much of their time. However, in this application process, there are already admission officers evaluating the applications and determining whether the applicant is accepted or rejected. When the officers come across a component that is less desirable or just doesn’t make the cut for their university’s standards, they are deciding to reject the applicant on account for a certain reason. The work is already done. All they would need to do is relay that information to the applicant in a concise, simple manner.

After deciding to reject an individual’s application, the admission officers could simply use a box checking system to indicate to the applicant why they were rejected. Whether their decision-making process be done on a computer or on paper, admission officers can check a box next to whichever factor was most influential in determining the rejection. Examples of such factors could include: GPA, SAT/ACT, college essay, extracurricular activities, amount of Advanced Classes Taken, portfolio and community service.

And for those applicants that think this knowledge would bring them down even more, colleges could create a question so the applicant could click “No, if I am rejected, I would not like to receive why.”

Senior Kaitlyn Hildebrand agreed, stating, “I feel like it would be nice to know why you got rejected because [college admission officers] are so vague in the emails that they send. You are left without any idea and you put so much time into the application. It would just be interesting to know why, but at the same time, I am not really sure if it would be possible because I think sometimes with a lot of schools, especially those who have lower acceptance rates, it’s a kind of lottery. It depends a lot on who you are and aspects  of your application, but also there could be someone just like you, and one of you will get in and one of you won’t… so it could be hard to pin point things.”

Senior Serena Ropersmith had an opposing view. She said, “I feel like I wouldn’t really want to know why I got rejected because I feel like in [Mrs. Jones’ class], we’ve read what the essay readers and [college admission officers] say about [applicants] and a lot of it is kind of mean, and I’m sure they wouldn’t say the same thing if they sent you a letter saying why. But I feel like it just kind of puts the kid down more by saying like you didn’t get in because you aren’t good enough in these areas or whatever.

The vast majority of us spent at least a couple of months working on these dang applications, so if a college is going to take the time to find something that is not up to standard with any of us and reject the application, I think it is reasonable for us to know why we won’t have a chance at attending the school in the upcoming fall.